Two bond options were presented to the Cedar Park City Council which will likely be on our ballot come November.  One of which is for $89.9 million and would include $15.3 million for the Destination Bell Boulevard project as well as $42.6 million for transportation projects, 10.8 million in park improvements, and $15.3 million for phase one of a new library.  The second option is for $83.9 million and does not include the Bell Boulevard project but does have $20.2 million for a new library, $11.9 million in park improvements, and $44.4 million for transportation projects.

So what is Destination Bell Boulevard?  Though no one is officially saying this, I think of it as what will be Cedar Park’s downtown since we don’t really have one.  The current plan includes moving Bell Blvd (old 183) eastward around the Buttercup Creek area to allow for 40 acres of retail, residential, and office space plus 12 acres for a park.  In a nutshell, the goals of the project are to work with the natural and historical assets of the area to create an economically vibrant corridor while maintaining traffic mobility.  Aspects of Destination Bell Boulevard are still in refinement but there are many details on the project’s website including renders and maps.  From all descriptions, I’m picturing something that looks a lot like the Domain which is very exciting since I think it will bring Cedar Park some real charm and character, not to mention money.  I, for one, will definitely be voting in favor of the bond for the Destination Bell Boulevard.  How about you? 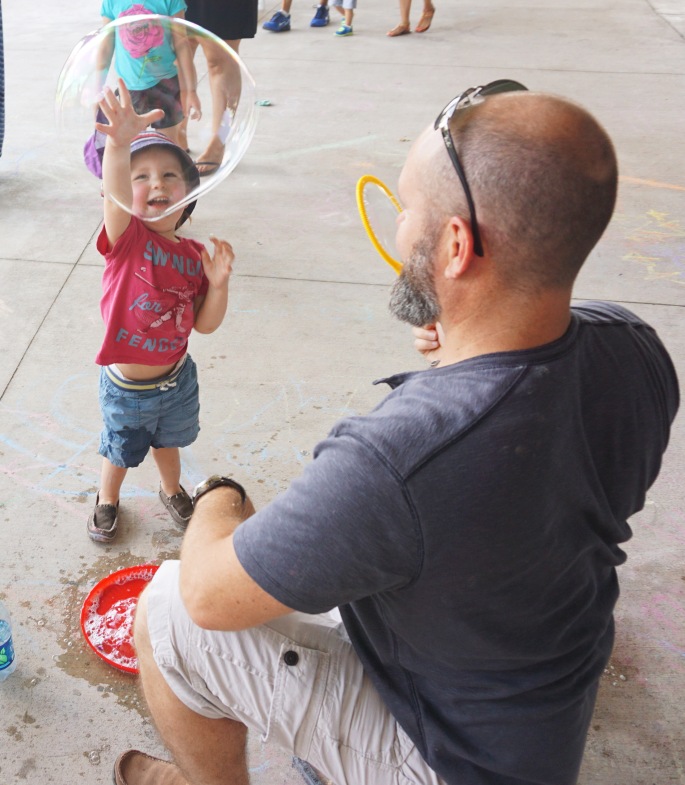 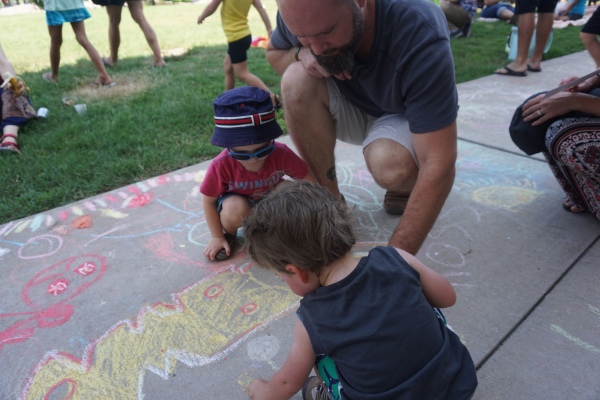 There seemed no better way to usher in summertime than watching a field of children chasing bubbles.  So on Saturday we met our friends Bill and Jessa and their baby-o Fox downtown at the Long Events Center for our first Bubblepalooza.  There wasn’t much more to it than a bunch of kids and an abundance of bubbles but it was really a lot of fun.  Bubbles float everywhere, and it made for a lot of mingling with other families.  Little Guy seems to thrive in these types of environments and was smiles all day.  Such a great sunshiny Saturday for us all!

The Good: It was free and just plain fun.

The Not-So-Good: Parking was a zoo.

Like most little boys, our son loves trains. We have books about trains, toy trains, and his grandma even got him his own rideable motorized train. The ultimate experience though is riding a “real” train where there are other people involved and a station of some sort. So far the “real” trains we have ridden include the MetroRail train, the train at Lakeline Mall, the Zilker Park train, the Austin Zoo train, and now we are happy to add to the list the Cedar Rock train. 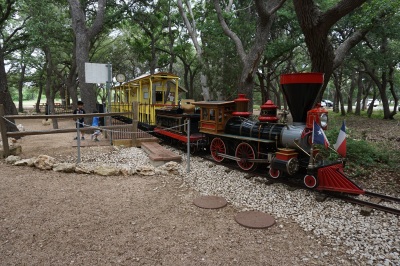 The train operator wore overalls and a conductor’s hat and called “all aboard” before punching our tickets. Then the train chugged us out of the “town”, through a forest, across open plains, past playing fields and a pond, and into a tunnel full of spiders (fake ones!). The round trip was about 15 minutes and was followed by play time in the town and with a stationery train, as well as optional individual train rides (which received mixed review from the other kids in the group who got tired of peddling with their hands). 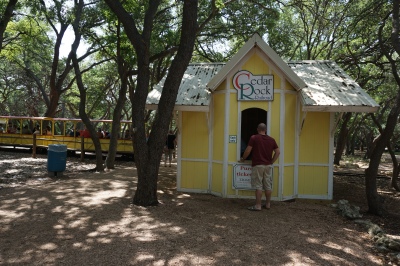 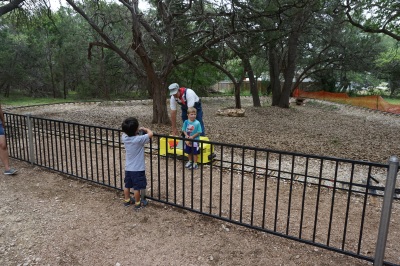 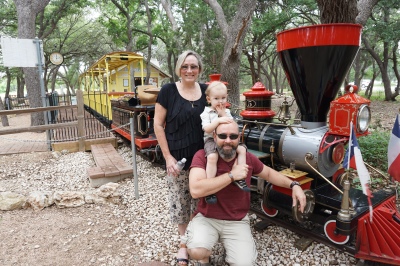 Perhaps the biggest discovery of the afternoon, however, was driving through nearly 800 acres of the Southwest Williamson County Regional Park to get to the Cedar Rock Railroad.  We saw playing fields, picnic pavilions, hike and bike trails, a splash pad, and I’m sure there’s even more we didn’t see.  Definitely a place we will be exploring further!

The Good:  If your kid likes trains, and Leander is close by, this is a no-brainer.  Tickets were only $2.50 per person.

The Not-So-Good:  I’m drawing a blank.

When the weather is sunny and you and your spouse want to enjoy a meal while the kids play near by, head to Lone Star Grille in Cedar Park.  Jared and I ate there for the first time last week, and we returned again just a couple days later because it is one of the few restaurants that keeps Little Guy entertained while we eat.  There is a fountain and two playsets and when we went over the weekend there was a bouncy house and live music too.  On our first visit, Jared and I had queso with fajita beef as an appetizer, and then we both ordered burgers – very tasty!  On our second visit the full-order of the Mucho Nachos did me in.  Somehow Jared managed to also fit in some Crispy Chicken Tacos which he said he would order again.  All in all a good dining experience! 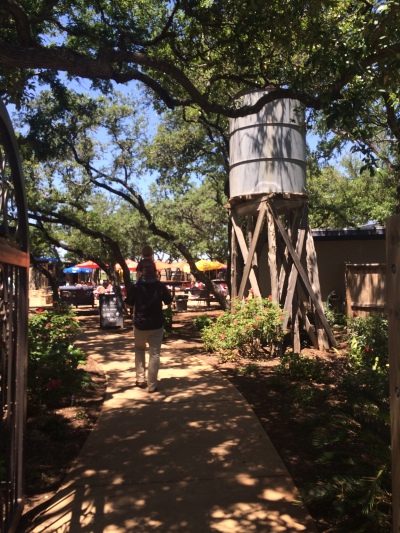 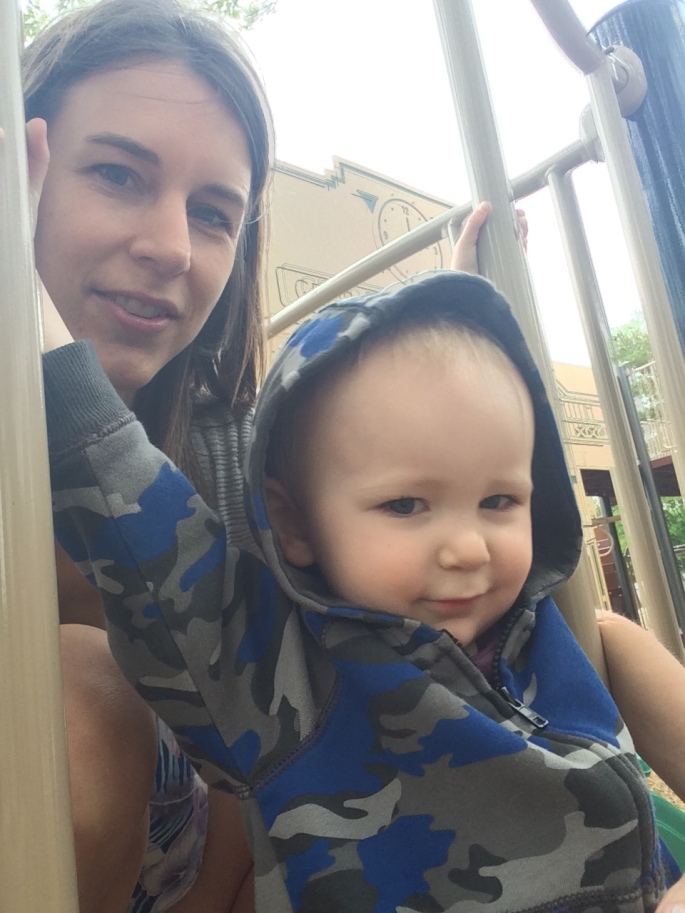 We recently visited our friends, Jessa and her little toddler Fox, who live in Georgetown and introduced us to Creative Playscape. To say it is a playground would be a vast understatement. As you can see from the photos there is a train station, a bank, and a store as fronts to a series of bridges, ladders, stairs, and slides. There are also swings for all ages and obstacle course type structures. If you are ever near downtown Georgetown with a kid, then you should definitely pay a visit. 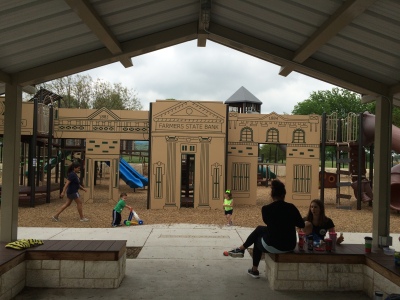 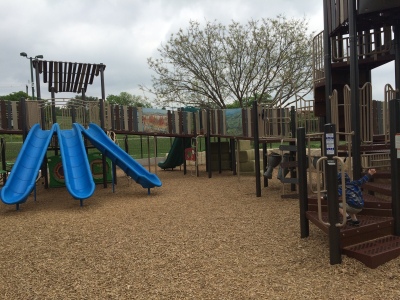 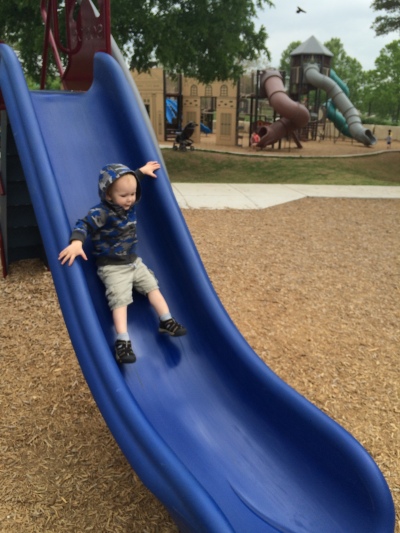 The Good: Free fun for children of all ages.

The Not-So-Good: None, unless you live far from San Gabriel Park.

Actually it is called the Austin Zoo and Sanctuary, with a heavy emphasis on the sanctuary.  If you are used to a big elaborate zoo, as I am having grown up near the one in Detroit, then you need to adjust your expectations.  Many of the animals are on in their years.  Picture blind tigers, balding monkeys, lots of farm animals and birds, a train, small enclosures, and dirt pathways.  All that said, you may be surprised to hear I LOVE the Austin Zoo and here’s why . . .

The Good:  Unlike other zoos where it can be sad to see animals in their prime confined within their exhibits, at the Austin Zoo you see old, sometimes ailing, animals enjoying a cushy retirement.  You see tigers that would probably have died if still in the wild but instead are served daily buckets of raw meat which they can digest as they laze beneath the shade of a tree.  And, of course, the whole zoo isn’t a senior citizen home, last year they welcomed rescued baby bears!  In short, the zoo is small and charming … and young kids don’t notice the difference anyway.  Plus instead of being a whole day excursion like the big zoos, you can see the Austin Zoo in a couple hours. 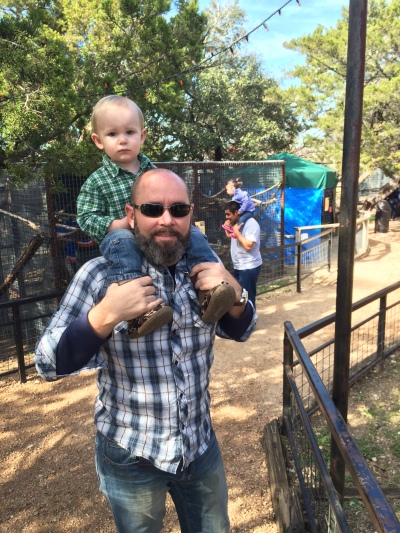 The Not-So-Good:  If your expectations are for a big flashy zoo, you will be out of luck.  Also if you have a specific animal you want to see, the Austin Zoo, being as small as it is, may not have it.

Overall:  The Austin Zoo is very Austin-y – quaint, quirky, and has lots of personality. 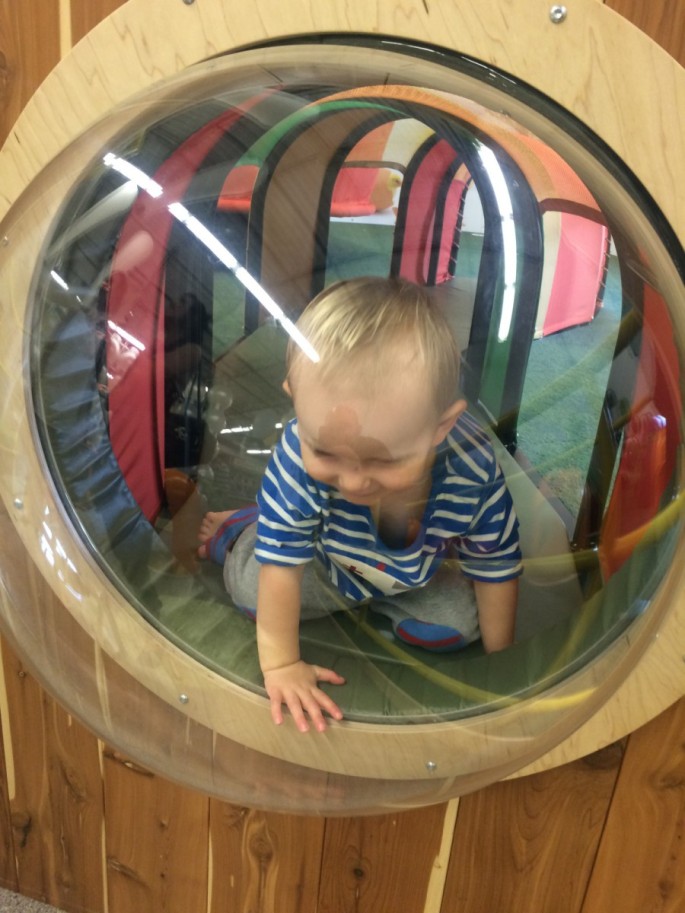 I never went to the original Austin Children’s Museum downtown.  That was before our days as parents.  With all the time we spend at the Austonian, we were initially disappointed when I was pregnant, and we heard the new museum would no longer be located around the corner.  However after listening to anyone who has been to both, it seems the new Thinkery blows the old one out of the water.  It has play spaces for babies on up to kids 8+ years old.  Our son currently loves the water room which is exactly as it sounds, an elaborate water table with stations for pouring and splashing and making music.  Though smocks and crocs are provided, most kids leave this room rather wet.  I recommend bringing a change of clothes over spending lots of time in front of the dryers.

Another favorite is the food market and chicken coop which has tons of plastic produce for collecting, sorting, weighing, and serving.

Also top on the list is the light room (tables with interactive colored light displays), the outdoor playground with waterfall, and baby space (a soft room with mirrors, a tunnel, and displays in the floor). 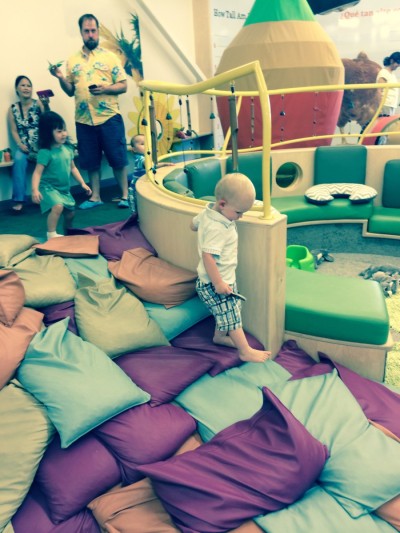 There’s so much to experience I can’t possibly describe it all here but suffice to say we enjoyed our time there so much we purchased a membership.

The Good: Everything I just talked about.

The Not-So-Good:  I’ve heard you don’t want to visit at the same time as large groups or field trips.

Overall:  We expect the Thinkery to remain a family favorite for many years to come!

After a year of saying “we need to ride the Metro”, we finally did, just to see what the experience was like.  In fact, we made a day of it.  Ride down in the morning, Jared, Little Guy, and I, catch lunch at the Driskill, take the free tour of the State Capitol, meet up with friends, then ride the Metro home. 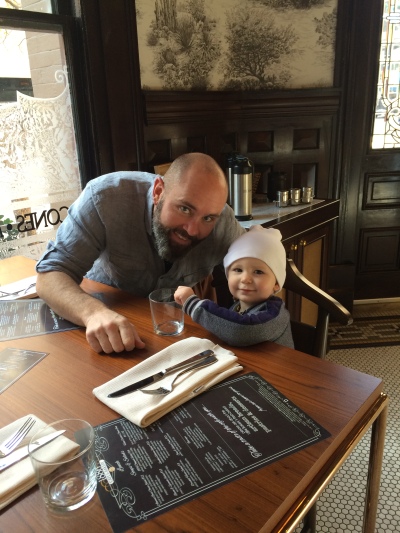 Here’s the good:  The park and ride stations and the train were all very nice, clean, and comfortable.  Like all metros, it was nice to avoid rush hour traffic and to be able to do things (check email, take selfies with Little Man, etc) during the trip.

The not-so-good:  On our ride back we were lucky to be getting on the train downtown because by the next stop, there were no seats left.  And when we exited at the Lakeline Station, there was so much congestion getting out of the parking lot, we wondered if it was enough to negate the time we had made up by taking the Metro.  If we were to ride again we would have parked at the Leander station which seems to have the least traffic and is still fairly close to our house. 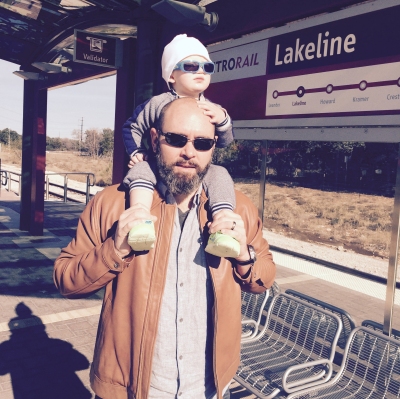 Overall:  It was a charming experience, especially for Little Guy who kept calling it “Tommy Train” after Thomas the Train.  We won’t use the Metro on a regular basis, but for a day of family fun and exploring Austin, we will definitely do this again. 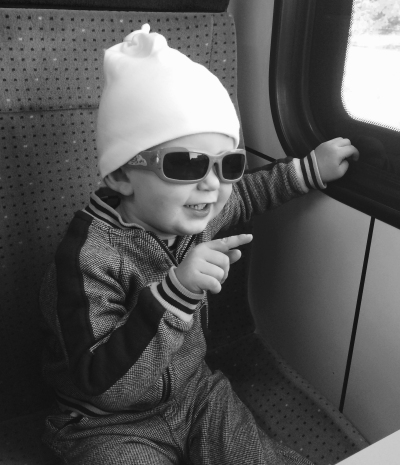 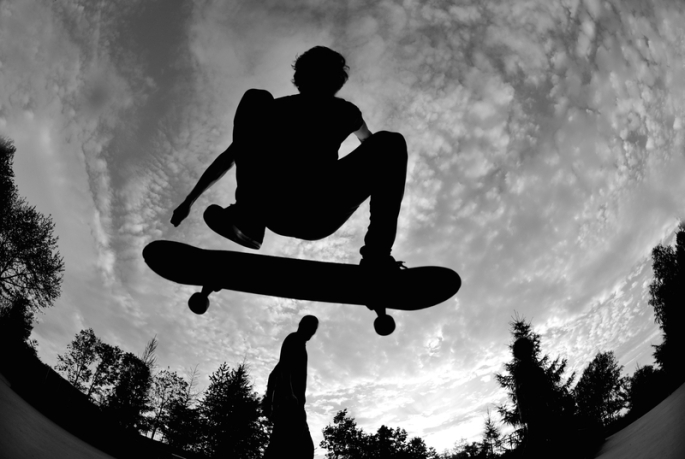 It is very exciting that Summer X Games is coming to Austin for at least the next 4 years. We were among 4 finalists with Chicago, Charlotte and Detroit, and luckily we were able to land the event after an 8-month evaluation process. The games were END_OF_DOCUMENT_TOKEN_TO_BE_REPLACED 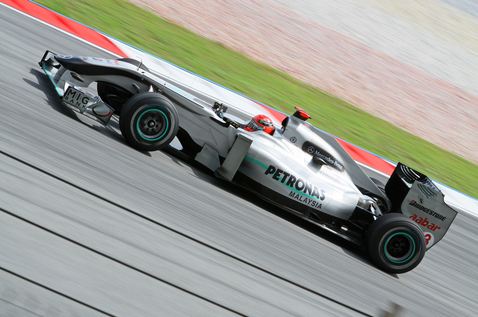 F1 comes to Austin November 16-18th, and there’s been a lot of discussion about what this means for Austin.  What effect will this have on our economy, jobs, taxes, and real estate values?  Mark Sprague’s latest article answers END_OF_DOCUMENT_TOKEN_TO_BE_REPLACED 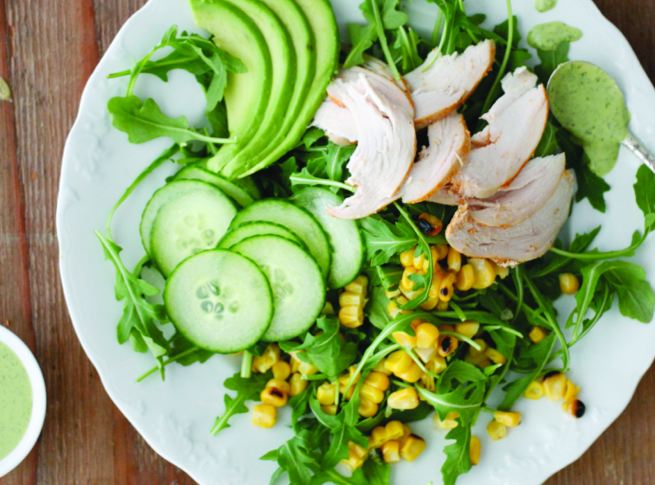 A big trend we are seeing in Austin homes are edible gardens, and if a home doesn’t have raised beds many buyers are at least looking for a sunny corner of the yard in which to start one.  We too have joined the fun by making END_OF_DOCUMENT_TOKEN_TO_BE_REPLACED